Sorry, you need to enable JavaScript to visit this website.

At the 2020 edition of the Apple Worldwide Developers Conference (WWDC), Apple announced that the new version of MacOS (nicknamed Big Sur) would ship with version 14 of the Safari web browser - promising Safari would be more privacy friendly. Which is a great move and in line with the regulatory and digital marketing landscapes.

However, based on fuzzy, out-of-context screenshots shown during the announcement, some digital marketing publications started asserting that the new Safari would block Google Analytics.

Here are some of the articles in question:

Within minutes, that poorly researched bit of fake news was all over social media.

So what really happened? Should you worry?

Cooler heads always prevail, so let’s take a step back and look closely at what really happened.

What is ITP and why does it matter?

The WWDC is generally the occasion for Apple to announce new features and key developments in their tech ecosystem from desktop and mobile operating systems to SDKs, APIs, and all that good technical stuff.

In recent years, Apple has used the WWDC to announce changes to the way they handle privacy in web and mobile apps, namely with initiatives such as ITP (Intelligent Tracking Protection), which is used in Safari, Apple's Webkit-based browser on Macs, iPhones, and iPads.

In a nutshell, ITP restricts the creation and the lifetime of cookies, which are used to persist and measure someone’s visit on one site (first party, a.k.a. 1P) or across multiple websites (third party, a.k.a. 3P). ITP makes things more difficult for digital marketers because users become harder to track and target.

If we use Google Analytics as a comparison, ITP can "reset" a known visitor to a new visitor after only a couple of days, instead of the usual 2 years - assuming users don’t change devices or clear their cookies.

If we look at ITP with our privacy hat on, even collecting user consent will not stop ITP from neutralizing cookies.

ITP arrives at the right moment; just as online privacy starts to finally take root with pieces of legislation such as GDPR and ePrivacy in Europe, CCPA in California, LGPD in Brazil, APA/NDB in Australia, APP in Japan, PIPA in Korea, and a lot more being made into bills and/or written into law.

Arguably the above pieces of legislation allow for the collection of user consent prior to collecting. So we should not really be worrying about Safari potentially collecting information that users consented to, right?

That was not even a consideration in the aforementioned pieces on "Safari blocks Google Analytics."

The most obvious way to show you is with a test. Luckily, I had MacOS Big Sur beta installed so I took a look under the hood - especially on the sites that published that "Safari blocks Google Analytics" story. Let's fire up Safari and turn on developer mode. 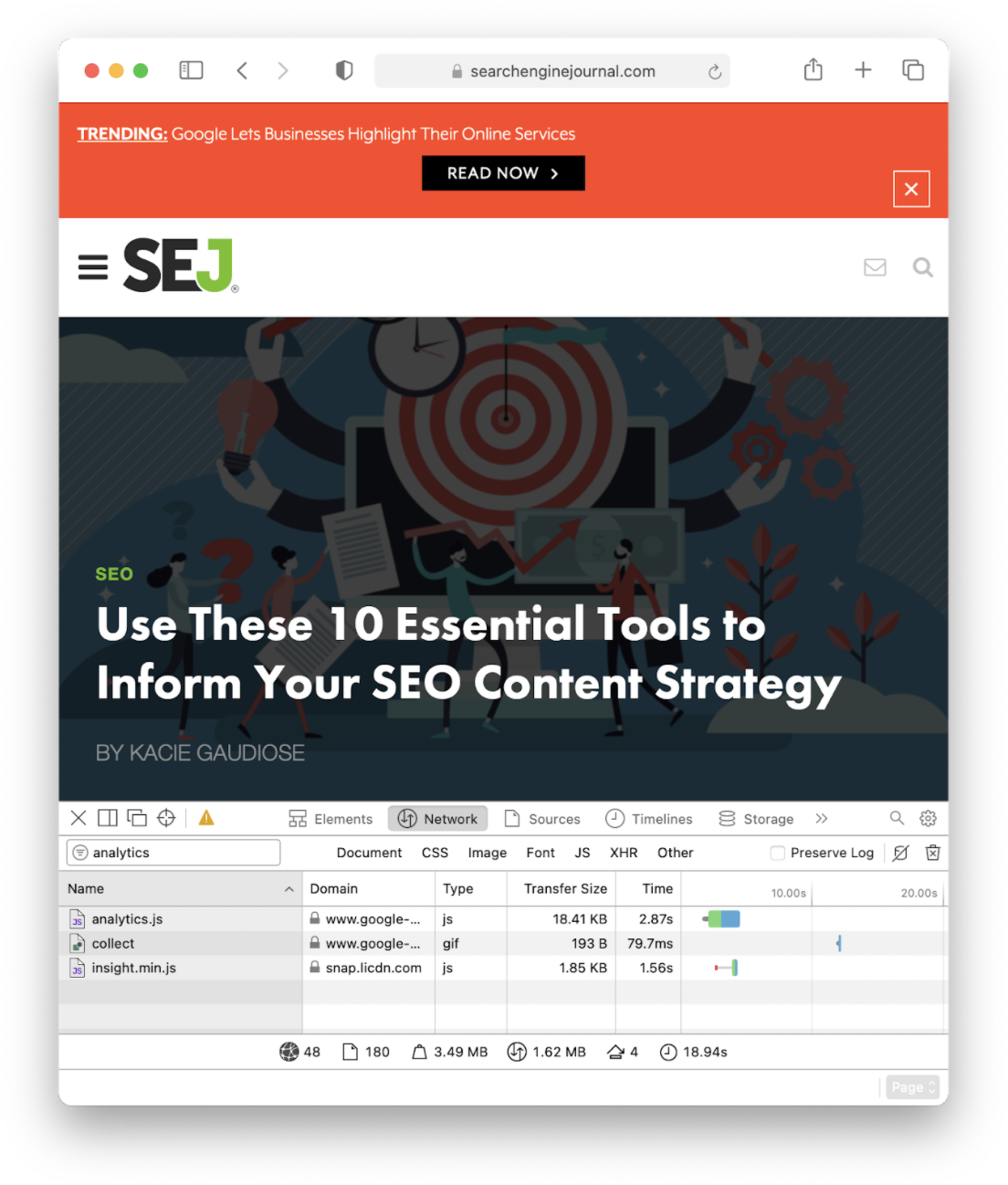 Let's clarify: what the panel below shows are the domain names of resources loaded by the page that are flagged in the ITP lists as potential tracking vectors using third-party cookies.

Other than that, ITP plays its role in drastically reducing the Google Analytics cookie’s lifetime to just a week as shown below.

ITP is enforced as per the spec by blocking third-party cookies and limiting cookies to a lifetime of a week at most.

So what's the big impact?

As mentioned, ITP is primarily going to reduce the time during which a visitor is identified. After a week, ITP deletes/resets the user cookie and the visitor is “reborn”. Not a great way to study user groups or cohorts, right?

If you’re worrying about the impact of ITP on your data collection, may I suggest reading this awesome piece on ITP simulation by my colleague Doug Hall.

What is important to remember is that Apple is using ITP block lists built in partnership with DuckDuckGo, a search engine that has made a name for itself as a privacy-friendly (read: anti-Google). I, for one, have yet to see what their business model is but that’s a story for another post.

At any rate, ITP lists are meant to block cookies for specific domain names.

Even if Apple did decide to block Google Analytics altogether, how big a deal are we talking about? According to StatCounter, Safari accounts for roughly 18% of browser market share (as of June 2020). Let's round this up to a neat 20%. That’s an awful lot of data to lose.

Arguably, Google Analytics wouldn’t be the only tracking solution that could be impacted. Let’s not forget about Adobe, Criteo, Amazon, Facebook, Comscore, Oracle—to name a few.

So if you keep implementing digital analytics according to the state of the art, by respecting privacy and tracking exclusively first-party data, you'll be a winner!

Let's get real for a moment. If tech journalists posting the story about Safari blocking Google Analytics knew about ITP, they wouldn't have published the story - or at the very least with a less sensational headline. Even John Wilander, the lead Webkit engineer behind ITP spoke out against the misconceptions behind this "Safari blocks GA piece."

This is unfortunately a case of bad tech journalism, where half-truths and clickbait titles drive page views. Pitting tech giants Apple and Google is just sensational and does not highlight the real story from WWDC: privacy matters and Apple are addressing it as they should.

In this, I echo my esteemed colleague Simo Ahava in that this kind of journalism is poorly researched at best, intentionally misleading at worst.

Most of the articles on this particular topic backtracked and offered "updates" but they got caught with their hand in the cookie jar.

To be fair, it is also Apple's fault for using misleading labeling.

But is it so bad considering we’re talking about a beta version of a web browser? Ìf anything, Apple now has a few months ahead of them to make adjustments before Big Sur and Safari.

Beyond the fear, uncertainty and doubt, this kind of publication is symptomatic of an industry that is scared by the effect that privacy regulation is having on their business.

How is MightyHive addressing this?

While we at MightyHive have long been preparing  for the death of the cookie and digital ecosystem focusing on first-party data, we can appreciate that initiatives such as ITP can make a digital marketer's life very complicated.

We strongly believe that the future of digital marketing lies in first party data, consent and data quality.

Cookies are on their way out but this does not mean the end of the world.

Get our newsletter with inspiration on the latest trends, projects and much more.